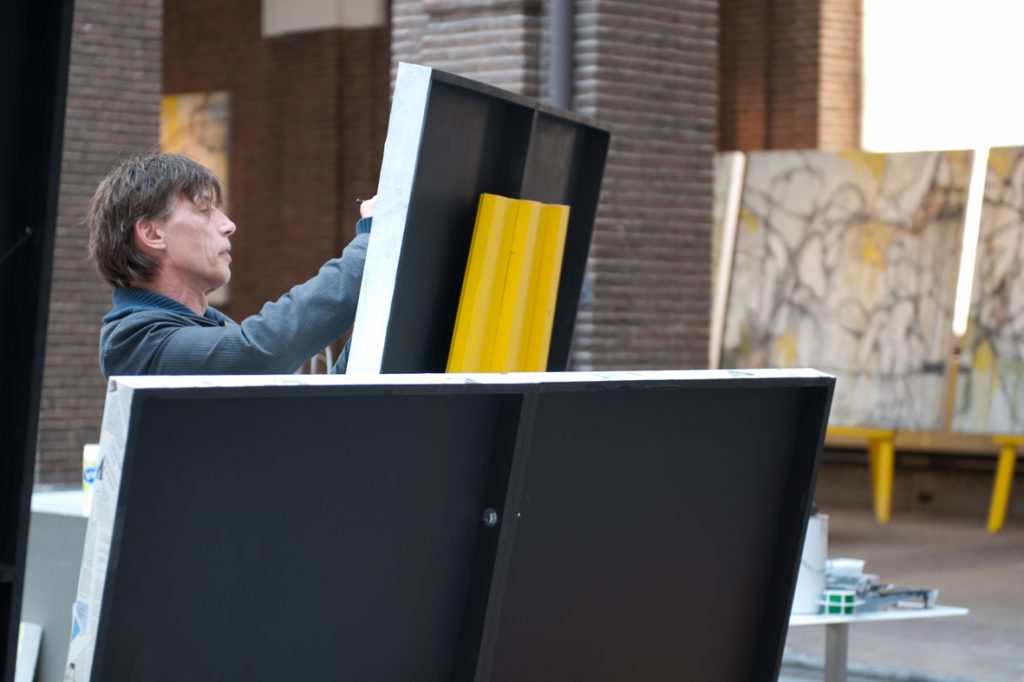 In principal I’ll first of all explore the idea and concept for a new project on it’s values of transformation and contradiction. The process of creating a new series of work is fundamental to developing a visual language through which I can communicate the feeling of experiencing the concept towards the spectator. My works define and redefine the meanings of process and transformation. Bringing elements of chaos and dissonance into a state of harmony, each work matures into a fully realized presence. Processing preliminary studies and sketches in general will precede the final execution of my initial concept for new works. In the early stages of concept development I will futhermore scout for suitable materials and inventory in order to be able to actually execute and develop the project without interuptions. Sometimes I’ll develop these projects over a period of one or two years before the actual studio process and production will start. As my work could be categorized within the categories of mixed media works and assemblages, almost continuously I’m researching and scouting to develop my pretty allready extended and well organized archive of undefined objects and other quirky stuff and materials. 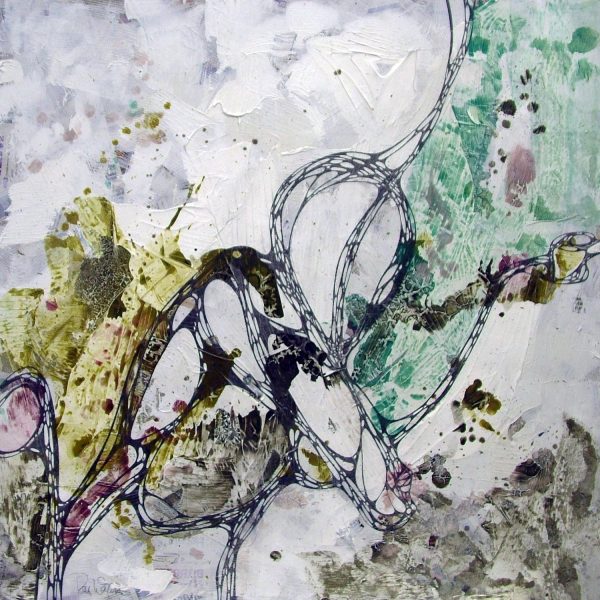 You use painting, photography and music to express yourself – which medium do you like best to work with and which challenges you the most?

I was forced to do a lot of thinking on this issue several years ago. At a certain point in life, everybody will reach a point of understanding the fact, that one can not do it all in life and that one will have to make choices. You can do it all, but you will not do anything on an optimal level in the end. Just a simple matter of not having enough time on hand. It’s a rather difficult development in (creative) life to realize that fact. Within the musical compositions and projects I did, there has always been that primair thought if the song in question would interact on a good level with the audience. This clearly states the fact that an unwanted and unwilling commercial compromise was going on there on a conscious or subconscious level. Within my photographic work I was able to reach a much higher level of satisfaction. We all can see and observe the same things but only few will posess the eye to take a picture of it. The thing that started to bother me in photography, is the plain fact that you will catch and actually borrow a pre-excisting situation within a picture and pretend that it is yours… Painting in the end is my winner of this issue… Painting kicks-off for me with a complete blank and the aspect of creating something from a scratch without any kind of concessions and/or interference from anyone or anywhere would position it as the ultimate medium to express myself on an optimal and sincere and honest level. 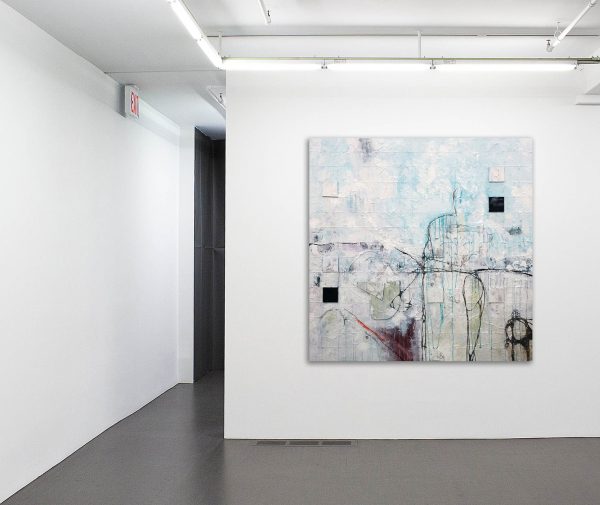 Which different techniques would you like to experiment with?

During the process of making my works, I de-struct, de-activate, re-construct and re-activate my materials and handle my work to that of building a relationship: a series of attempts at intimacy with the work, of fallen expectations, of failures and finally, of surrender. It is in the suspended spaces between the swaying of depicted figuration and abstraction, that these worlds take shape. My work acts as a rhythm of color, of possibility, of realization and as a sorting structure through which I generate harmonies within the chaos around me.I translate my creativity and visions into multi-layered works of art that reflect a characteristic abstract language of signs and shapes. Within my works I intend to reveal a deeper meaning and reflect my views on contemporary issues. By reaching a state of liberation from existing patterns, the interplay of lines is dominated by the metamorphosis which conceals the evaluation of the work from the source. I tend to stimulate the spectator’s fantasy and awareness by the intuitive and specific combination of color, material and shape, thus seducing the spectator towards an alternative view on this world. For all of the above reasons, I’m actually completely satisfied with my processes and the techniques involved. On the other hand, for several years now, I’m involved in an international operating art community or network, called Global Art Project or GAP. An international network of mixed media artists who collaborate, research, develop, inspire, tease, trigger, communicate and exhibit each other. One of the most intriguing aspects I became confronted by within my collaboration with GAP would be my involvement within the frag process. Mixed-media works derived from the exchange between members of GAP, relinquishing responsibility or ownership going beyond the original intention of an image or idea broken down into fragments (frags) resulting in a deconstruction, a re-ordering of the visual universe into new ways of seeing. frags or the fragments, the raw materials that might become elements of mixed-media collages or paintings… torn found papers, billboard tearings, fabric, found shopping lists, photos and negatives, discarded canvas and throw-aways that are given new life by another artist who incorporates these raw materials into something new; a pretty intriguing way to colaborate via the mail and internet as well as in-person. There are so many lessons an artist can learn from a process like the GAP frag project…. 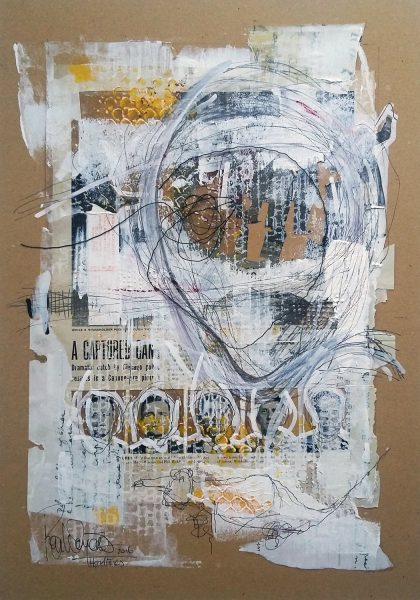 Your work engages with current events and contemporary society: how do you pick up those topics and what motives are you using?

Reviewing a worldwide climate of inflaming violence and it’s obvious consequences, laid-back absorbed from a cozy armchair as presented by a large variety of conveniently censored news-broadcasts, I developed and constructed a very individual concept and style that is trademarking these projects. My visualization and philosophy on the concepts for these projects, can be enigmatic in parts and often they are deliberately dark and dazzling at the same time. Furthermore the concepts mostly contain a highly potent mixture of symbolism that in my opinion works as an immersion booster. I´m proud to be able to call myself an idealist and there is a strong essence of idealism integrated within my artistic processes. Thriving on my freedom of expression, Overall I’ll develop projects in order to reflect my antipathyor solidarity to the peticular cause as integrated within the concept. In general the works will discharge a positive loaded energy field from a distant viewing point and will reveal the actual and opposite details only by closer examination.

With the exhibition of projects like this, I intend to transfer my views and thoughts to the spectator, to improve awareness and to promote and to stimulate an open dialogue and discussion on specific and often sensitive issues. 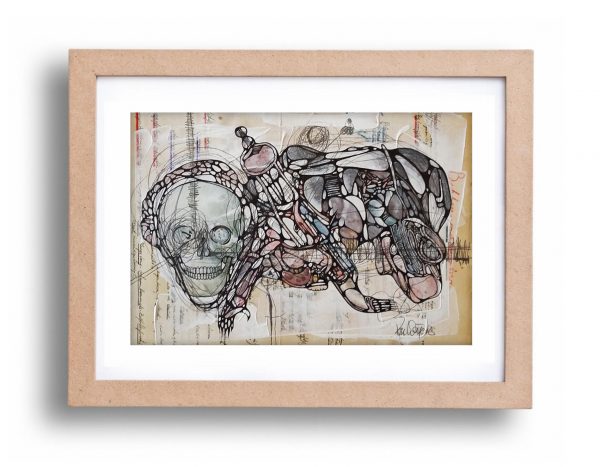 How would you describe the Dutch artistic scene? And which artists do you admire?

The Netherlandsis home to one of Europe’s largest developing contemporary art markets, with a large amount of emerging artists as well as a large quantity of more or less renown professional artists contributing to the formation of the Dutch arts scene. As a country,the Netherlandsputs great emphasis on the arts, with large-scale art fairs and events such as for instance, TEFAF in Maastricht, Art Amsterdam and Art Rotterdam, displaying and promoting talent. Furthermore the Netherlands offers a wide range of contemporary galleries mainly situated in the bigger cities, that represent a vast range of mainly Dutch artists. A large quantity of museums and other art institution provide a large quantity of high end exhibitions. In spite of the above it needs to be mentioned that the art scene in general is changing into a commercial, marketing related, consumer friendly endeavor, targetting on the money talks principle. (Living) Artists therfore are investigating into alternative ways to develop their art practice. Still, the Netherlands is one of the thriving art countries in the world today. My admiration for artists, I would concider to be a pretty subjective issue. I am able to connect, to relate and to respect as long as the connection, thee relation and the respect appears to be honest and mutual. I personally admire scores of work from a large quantity of famous and infamous Dutch artists… (diplomatic answer). 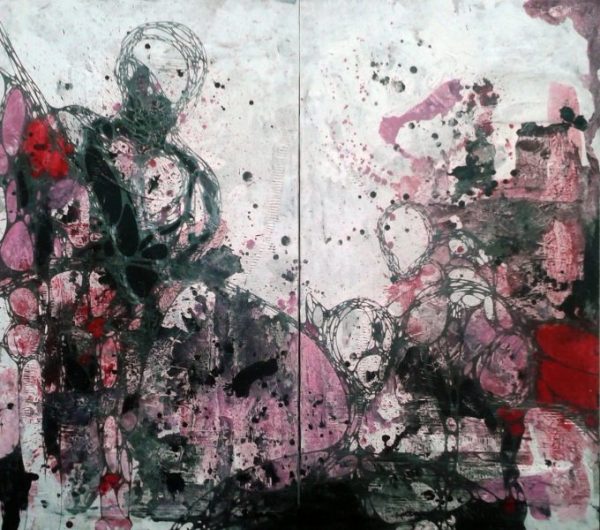 In the spotlight: Chibuike Uzoma 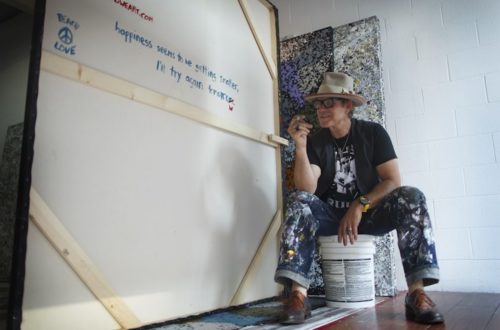 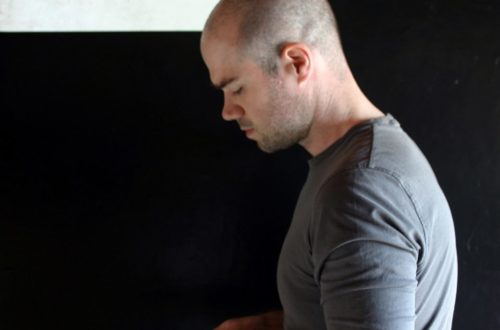 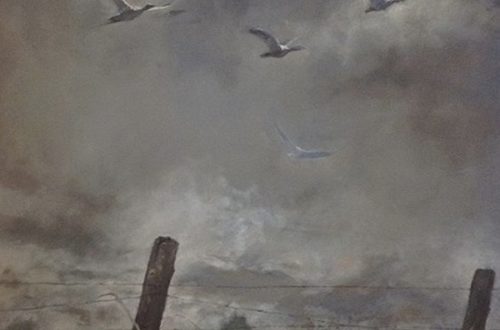