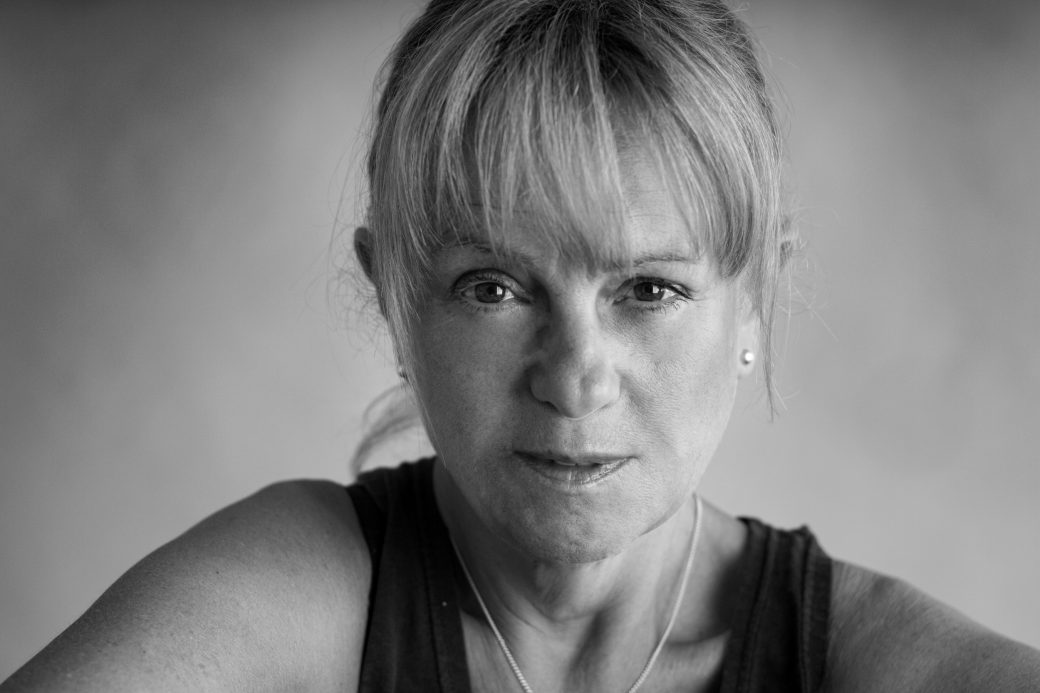 Please introduce yourself to us!

I am Gina Parr, Brtish painter and photographer. In 2007 I returned to work full time as an Artist after a 25 year career as a Television Production Set Designer in London and in 2010 moved back to Devon. I originally graduated with a First Class BA Honours Degree in Fine Art in 1979, practiced as a Performance Artist in the early 1980’s with funding from Arts Council England and went on to study Set Design at Chelsea College of Art, then working for the BBC, eventually, as a Senior Production Set Designer and later as a freelance Designer for all major Television channels. I designed many prestigious shows such as the original Eastenders Albert Square and interiors, The Brit Awards, The Royal Variety Performance, Mercury Music Awards, Goodness Gracious Me and Shooting Stars. During this time I also lectured in art and design in various colleges including Chelsea College of Art and Nottingham University.

Several of my artworks are held in the permanent collection of Keble College Oxford, by the Director of Jestico + Whiles Architects London, the President of the Boston Children’s Museum USA, a Senior Economist at Goldman Sachs International, London and many other private collections worldwide. I have exhibited widely in galleries and fairs throughout the UK and London and will have my first Copenhagen solo show in 2019.

I live and work between Devon and the East End of London.

How did you find your voice as an artist?

I knew I wanted to be an artist at a very young age. Drawing and painting were always my chosen childhood means of expression. As an only child, the secret dialogue I developed through my art gave me the means to express and convey feelings that I was unable to do adequately through conversation or contact with others. 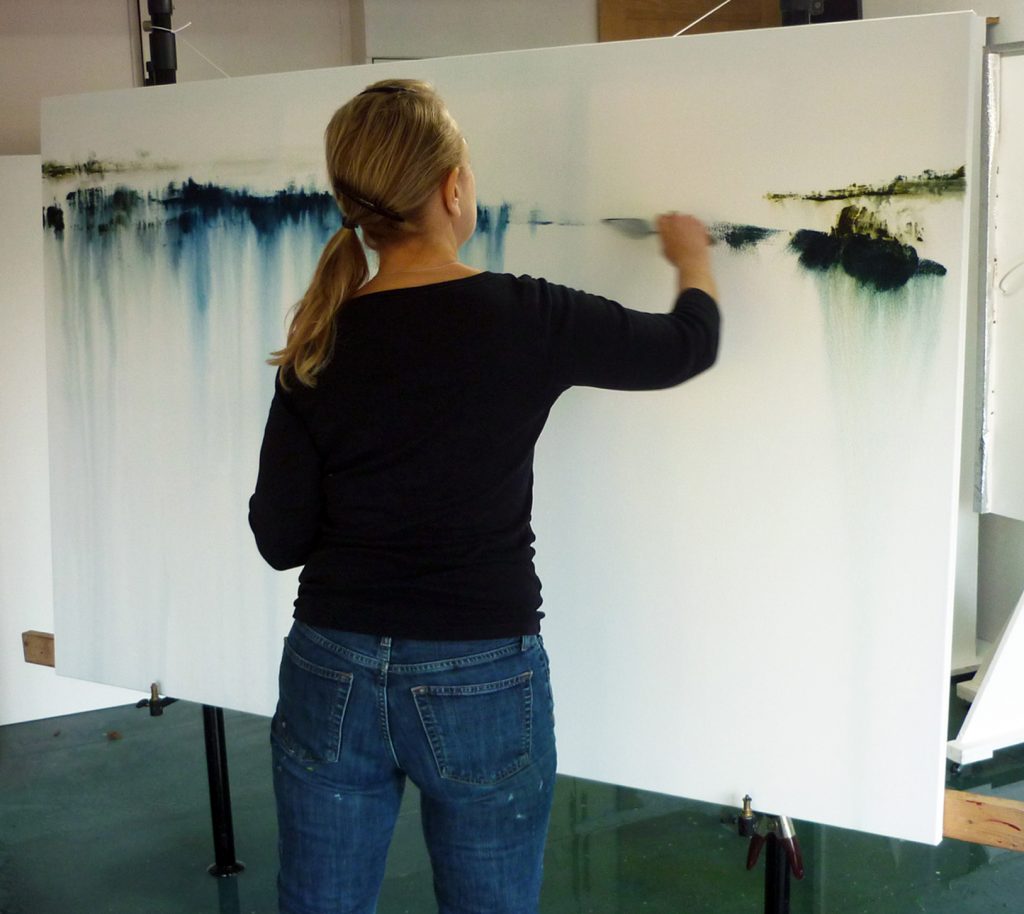 Where do you get your inspiration from?

As a child I spent time mackerel fishing with my father, the trips forming my emotional bond with the landscape and seascape of the South West: beautiful, wild open spaces, changes in the weather and terrain and the freedom of natural space. Counter to this, my life at home was very chaotic and cramped as my mother, a hoarder, filled every available space with possessions and was obsessed with collecting. My father Wilf’ died when I was 17, leading to my mother’s hoarding escalating to extreme levels. My work is a combination of the joy and melancholy taken from these memories and present day reactions to beauty in the natural world, both here in Devon and as I travel. I’m not interested in reproducing place, rather in producing something in its own right born of the process of painting and a need to control a created space. 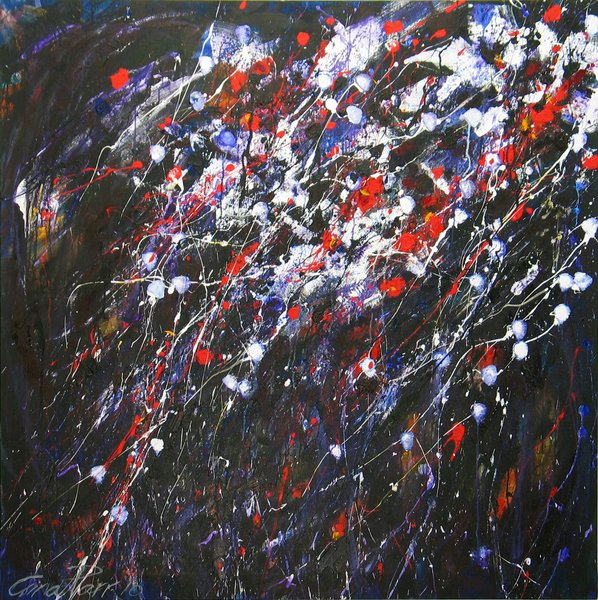 Is there a particular material that you prefer to work with?

When painting, I am completely immersed in the process and build a reverberating relationship with the canvas, a push and pull of chaos and control. As much is taken away from the painting as is added, with constant building and washing of the canvas, aiming to invoke an atmosphere drawn from the process, the initial emotional trigger and the colour palette employed. I use water based oil, charcoal, acrylic and utilise palette knife, cloth, brush and sponge to add, remove, scratch, blur and work the paint. Large amounts of water are often poured down the canvas, making it necessary to paint in wellingtons…..

My photography, my way of “painting” whilst traveling and away from my studio, and often mistaken as images of my paintings, extracts illusionary space and form from sometimes cramped and chaotic environments in Europe, urban India, the Far East, and Cuba. I photograph marks, decay and textures, some of which have been laid down by others with previous intent, which become abstract worlds, fictional and chimerical places. I have found a developing symbiosis between my Photography and my Painting. My photographs are printed onto Hahnemuhle 310 gms German etching paper using archival inks. 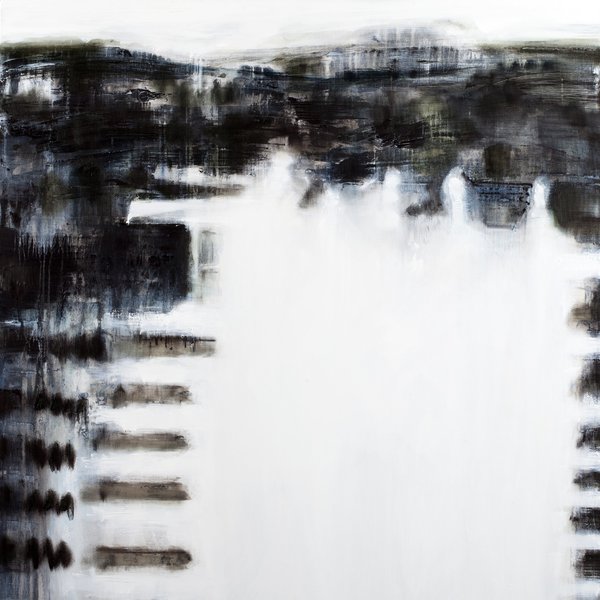 I love being able to work full time at the profession I have desired since childhood and being by myself in my studio, just me and Radio 4 as background. I don’t listen specifically, I like the reassurance and comfort of the sound, but very occasionally something will come up which also feeds into the work at hand. I also enjoy combining my love of travel with my photography and the excitement of making art on the move. I can’t imagine a day without creativity, it is who I am.

How to insure an artwork? 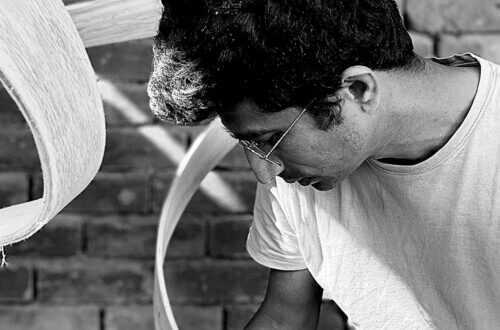 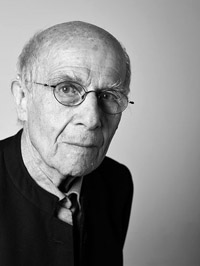 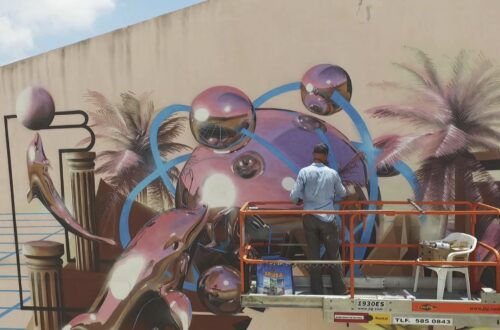