Singulart Magazine > Spotlight on... > Artists > A Day With Susan Washington

Susan Washington’s serene Poconos mountain surroundings are a far cry from the hustle and bustle of her New York upbringing. With a godmother that taught her origami techniques as a child, a punk-flavored city adolescence and over a decade of experience in the fashion industry, creativity has always decorated her days and merged with business endeavors to result in an admirable, versatile career. Despite the fact that her artistic path may not have always had a clear direction or destination, Washington has taken it with enthusiasm, openness, and an unquenchable thirst for growth. We sat down to learn more about her process and story.

Good morning, Susan! What’s the first thing you do when you wake up in the morning?

I check to see if it’s sunny out and run down the stairs to make coffee! Sunny days are motivating! I have a boxer and a husky and I usually let them out to run, and watch them play in the backyard while coffee is brewing. My studio is an extension of my house, so I’m usually right in there pretty early and spend the first couple of hours catching up on emails, clients and marketing, as well as reading about art and what’s going on in that world.

What inspires you to create every day?

I’m often asked this question and my answer hasn’t changed much. I’m inspired by the ability to create. I am so grateful to be able to do what I love most in the world for a living – how could I not be inspired?

I love the quote from Picasso: “Inspiration exists but it has to find you working.” Right now, I’m working on a new body of work and for the most part things are flowing well. However, sometimes when inspiration doesn’t immediately come to me, I will just put up a raw canvas on my studio walls and freely “play” around with charcoal and paint. It’s the act of creating that inspires me, and when I’m able to use my materials without any agenda, a fire is always sparked.

It looks like…a mess! An organized mess. I work with so many materials – I have tons of oil pigment sticks, mediums, containers; I work with brushes and sticks and cardboard, textiles and old ripped-up canvases.

Currently I’m working on several pieces at once. I like to focus on one piece and let it rest a bit, take my eyes off it for a while so that later I can go back to it fresh. I have about 4 different work stations – each for 3×4’ paintings and over, and at each one I have a pile of oils and cups and textiles. But for me it’s a sacred place. Anyone who comes in normally asks if they can enter; I like that people understand how special of a place it is (I never tell anyone they can’t come in!)

My studio overlooks my large garden which is really nice in the summertime….not so much during the winter.

Can you tell us a bit about your background in Fashion?

I grew up in Brooklyn – Sheepshead Bay. When I was in high school and would get out (or cut!) early, I would take the train into the city and spend the afternoon/evening walking around The Village and SoHo. I just loved being there – the energy, the artists, the craziness and – of course – the galleries. At 17 I bought my first painting from a gallery in the city, which was a big deal for me. I had a part-time job at Lord and Taylor and saved up for months!

I hung outat Washington Square Park a lot with friends, artists, creatives, and punk rockers,and started designing my own clothes to go out in – mostly to wear when going out dancing at places like the Mudd Club or Danceteria. I had friends who were studying fashion at the time and they would show me things they were learning in class and how they made patterns. I found it so interesting, and began walking around with a sketchbook in hand, drawing clothes I liked and then turning them into my own outfits. I used any fabric I could get my hands on – including black sheets and safety pins to make dresses and tunics.

A few years later, I started working at Nautica with David Chu as well as in the Mens division of Dior. There were times when the gang was off in Osaka for fabric viewings and things turned quiet. During these periods I would always wind up back with the designers. That’s where I developed my love for textiles and reconstructing pieces of fabric to create something new.

What made you make the switch to painting?

After years inthe craziness of the NYC fashion industry, I decided to relocate to the Poconos, where I have my studio today. I started painting again, met my British husband who was living in London at the time, studied with him for a bit before falling in love and then he relocated here.

I went to art school in my 40s after a gallerist sold a painting of mine. She asked if I could put it in one of her group shows, and it sold a couple of days later. She took another piece from me and the same thing happened. I had always painted but never showed my work to anyone, so having someone want to own my art was a big thing for me.

Describe the core of your technique or style.

Looking back at my work over the last several years, you can see the continuous, linear thought process. But my technique has recently changed drastically. Prior to my current collection, I would work from a digital sketch, superimposing over my own work and printing it out as a guide. There came a point, however, where I felt there was a disconnect, that it wasn’t truly coming from within. I knew where it would go most of the time and this became boring.

So I decided to stop doing that and just be with the canvas, which is when unbelievable things started to happen. I would begin working, then see elements and ideas and art on the canvas that I had barely even realized or even remembered having created. This encouraged me to trust myself more and I began to touch something deeper inside to pull out onto the canvas. These days, my paintings evolve just as they should, without me having to refer to a sketch or try and force things to happen.

What are your top 3 studio essentials?

How do you know or decide when an artwork is finished?

Honestly, a piece is never really finished until it leaves the studio. Anything left in there is fair game to be revisited. Sometimes when I feel a painting is ‘done,” I’ll face it towards the wall for a couple of weeks. If I can go back, turn it around and feel even more in love with it, I’ll feel confident letting it leave the studio. Other times, I revisit a work after a couple of weeks and feel like hitting my head, asking myself “What the heck was I thinking?!”

What do you like to do to unwind after a day’s work?

Right now, I’m reading ‘NinthStreet Women’ and loving it! If I read, it’s usually art-related, sometimes travel related, too. I don’t watch much TV. My husband is an artist and we often go out together to meet up with other artist friends, venture into NY for openings and museums. And then there is yoga.

What’s your overall favorite aspect of the creative process?

I love the challenge and the feeling of accomplishment. For example, when I was using my digital mock-ups, the process became too familiar and lost its challenging element. So when I started this new body of work, I was so excited with the challenges it presented. It proposed a new way of working, new processes of implementing mediums and tools. I wasn’t sure how things were going to react, but I’m really enjoying discovering all these new elements.

Of course, the creative process is never easy. It brings troubles, tears and some occasional swearing! But it’s worth it.

I also like how the process transports me somewhere else, without ever having to leave the studio. I dive so deeply into the work until it’s only about me and the paint (and the music.) This immersion is just a fantastic feeling.

A Day With Kirstin McCoy

A Day With Gregg Chadwick 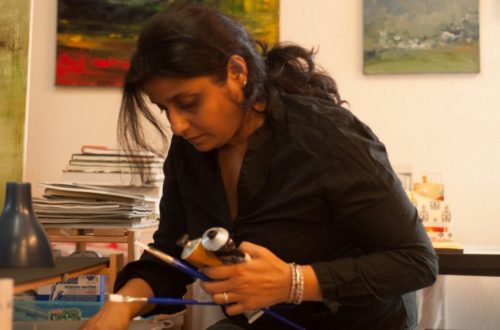 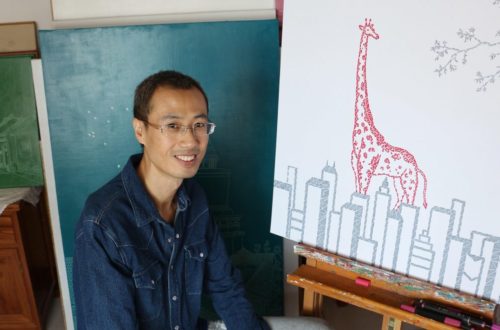