Singulart Magazine > Art History > Movements and techniques > Aviation in Art: Then and Now 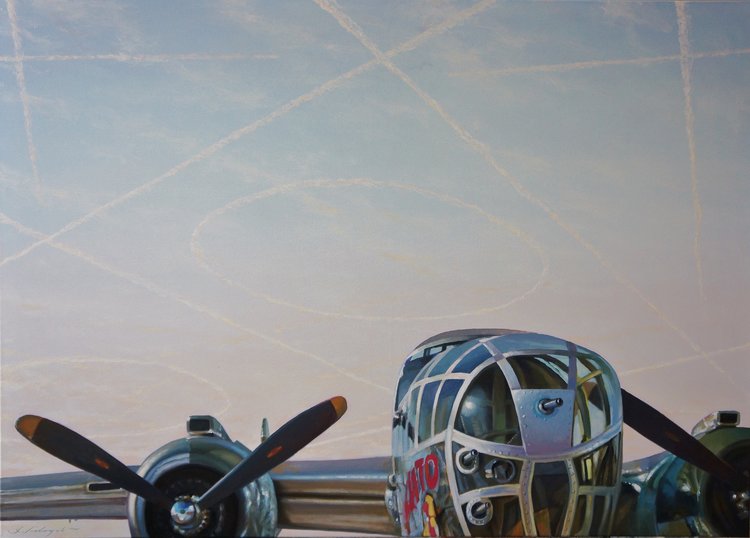 While we may mostly associate aviation with airport queues, preserved warplanes in museums and model collectibles, the theme has found its way into art in many ways throughout various periods. Art, of course, has long explored human struggles and triumphs, including significant technological developments such as the emergence of air travel. So how has art responded to aviation? In this article, we take a look at two artists for whom aviation has played a major role in creating both art and artist.

Art is born in a dive-bomber

One interesting connection from the history books lies in the story of Joseph Beuys (1921-1986), famous German painter, sculptor, performance artist, installation artist, art theorist and teacher. Though mostly known for his involvement in the Fluxus movement in the 1960s and 70s, along with his overall criticism of capitalism and general pacifism, Beuys served in the Luftwaffe in the Second World War as a radio operator and gunner before becoming an artist.

Beuys’s art was undoubtedly influenced by the war; like many, he saw the future as a chance to shape a new social order, and art was his vehicle through which to do so. His time spent in the German air force, however, also influenced another famous aspect of his persona: the great Beuys myth that he himself created. An important event in his story had long been his involvement in a plane crash in the war in 1944. Beuys claimed that his plane crashed in Crimea on 16th March, and that, as the lone survivor, he was buried unconscious under snow before being rescued by a group of local Tatars who covered him in animal fat and felt to keep him from freezing. This story has since been confirmed as a lie. All records apart from Beuys’s acknowledge the crash, but attest that there were no Tatar tribes-people present at the time and that Beuys was in fact conscious when he was pulled from the wreckage by a German commando.

But Beuys’s air crash mythology fueled his art and defined his creative identity. Animal fat and felt became key materials for the artist, and wrapping himself in blankets was a regular feature of his performances. Was the lie, then, Beuys’s first work of art? Or was the German genuinely traumatized from the experience and convinced that the circumstances he recounted were true? (The story was not disproved withing Beuys’s lifetime; it in fact featured in his obituary.) Beuys always maintained that art shouldn’t have to be logically explained, and furthermore that art could be anything: a classroom with a blackboard, a chair with a piece of fat on it, a fabricated story from a world war presented to the public as a truth inherent to his own personhood?

One artist who deals with aviation more directly in his art is Singulart’s own Jeremy Melloul. The French photographer employs aviation as his central theme, capturing planes from a range of historical periods and shooting them from different angles. He sometimes focuses on intricate details of the aircraft’s design, and other times pulls back to shoot a magnificent sky dotted with planes.

Melloul became fascinated with air travel at a young age, having watched, enthralled, as jets shot across the sky as part of Paris’s 14th of July parades when he was a child. His first discovery of aeronautical photography was at age 13, when he took a trip to the airport accompanied by a small digital camera and captured airplanes as they raced down the runway and took off.

Influenced by the work of Katsuhiko Tokunage and Anthony Pecci, Melloul now has his sights set on another box to tick. ‘I would very much like to make a series of Air to Air photos,’ he says, ‘especially with fighter and aerobatics planes as my subjects.’ Air to Air photography is when the photo of an airplane is taken from within another, transforming the photographer from mere observer to airborne companion.

Both Beuys and Melloul are examples of the power of aviation in art. Airplanes represent awe-inspiring springboards for creation, they exist as design feats on their own, and sometimes, as in the case of Beuys, they are a space in which to invent oneself.

To reflect on this fascinating theme and tide us over until Melloul explores his soaring new endeavor, discover a selection of artists on Singulart who explore the world of aviation in their artistic practice: 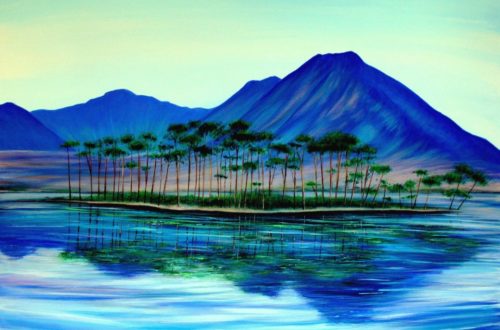