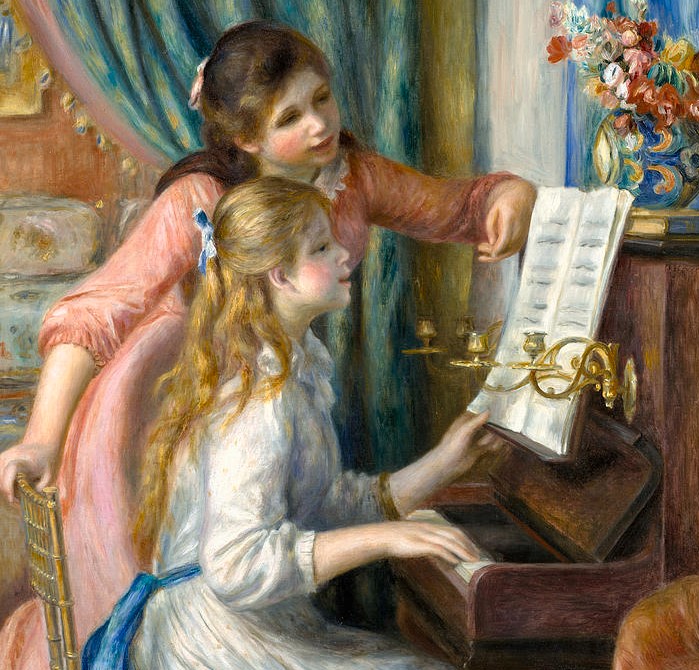 In Girls at the Piano, Renoir depicts an idealized image of modern bourgeois life and displays his talent for painting the female figure. In this article, Singulart discusses the artist’s life and his mature style exemplified in this work.

Pierre-Auguste Renoir (1841-1919) was a French painter and founder of the Impressionist movement. He is particularly renowned for his explorations of female beauty and sensuality, continuing in the tradition of other artists such as Rubens and Watteau. He was born in Limoges, where his father worked as a tailor before the family moved to Paris in 1844 in search of a more prosperous life.

The Renoir family home was located on Rue d’Argenteuil, in close proximity to the Louvre, thus from a young age, Renoir was exposed to art and discovered a natural talent for drawing. He was also a talented singer, however due to his family’s financial circumstances, he stopped singing lessons to become an apprentice in a porcelain factory, aged thirteen. He was talented at his work, but not passionate and thus he decided to study to enter the Ecole des Beaux Arts. In 1862, he began studying under Charles Gleyre in Paris, where he met other artists including Alfred Sisley, Frédéric Bazille and Claude Monet.

Renoir began exhibiting at the Paris Salon in 1864 and sold his first painting in 1868. He was inspired by the style and subject of some of his modern contemporaries such as Pissarro and Manet and hoped to forge a reputation as a portrait painter. His rise to recognition was perhaps hindered by the instability caused by the Franco-Prussian war. Alongside Monet, Sisley, Pissarro and several other artists, Renoir helped to set up the first Impressionist exhibition in 1874 and participated with six paintings. Between 1881 and 1882, he traveled extensively, studying many of the artists he admired, from Delacroix in Algeria to Titian in Florence.

In 1890 he married Aline Victorine Charigot, a dressmaker who had modeled for several of his paintings and with whom he already had a son, Pierre Renoir, born in 1885. In 1892, Renoir developed rheumatoid arthritis and in 1907 he moved to Cagnes-sur-Mer near the Mediterranean coast and continued to paint until his death, despite his movement being severely limited by the arthritis. In 1919, the last year of his life, he visited the Louvre to see his paintings hung alongside the other great masters of the history of art.

In his early works, Renoir incorporated many different influences from Delacroix’s colorism and Camille Corot’s use of light to the realism of Courbet and Manet’s works and Degas’ portrayal of movement. He was also greatly influenced by the plein air painting of Monet and developed this technique extensively in his own works during his Impressionist period. After 1890, his style transitioned again and he moved from Impressionism back to the Realism of his earlier works, influenced by the works of Renaissance masters that he studied during his travels. He also turned his focus from outdoor subject matter to female nudes and domestic scenes. Pierre-Auguste Renoir was a prolific artist and painted several thousands of works during his lifetime.

Girls at the Piano: An Idealistic Vision of Modern Life

In Girls at the Piano, Renoir reworks a classical theme that was popular among 18th century French painters such as Fragonard and updates it with a touch of Impressionism. He depicts an idealistic image, two young girls sit at a piano: a blonde in a white dress and a blue sash reads from a score, while a brunette in pink dress with a white collar leans over her shoulder. Renoir was renowned for his portrayal of the female figure and here the two young girls radiate a sense of peace and perfection. Renoir combines this classical theme and composition with elements of Impressionism, as was typical of his later style. He paints them in a contemporary, bourgeois interior, with its plush pastel fittings he depicts an albeit idealized scene of everyday life, however he forgoes details in order to focus on the two central figures. Renoir returned to this theme numerous times and there are at least six other versions of Girls at the Piano.

Institutional Recognition for Renoir and the Impressionists

By the 1890’s, the French State was still yet to recognize Renoir’s success and had not made any official purchases of his work. This changed in 1892, when Stéphane Mallarmé, an admirer of Renoir, helped Roger Marx, a member of the Beaux Arts Administration to launch an initiative to add Impressionist works to national museums. Consequently, Girls at the Piano was commissioned and acquired by the Musée du Luxembourg.

Large Nude and Renoir's Intersection of Classic and Impressionist Painting 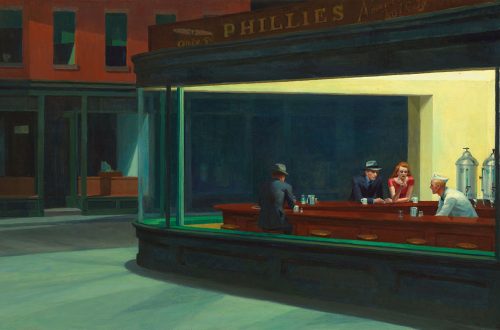 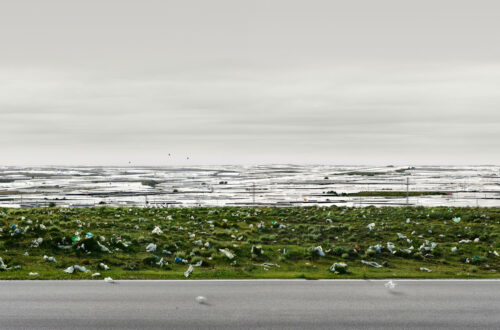