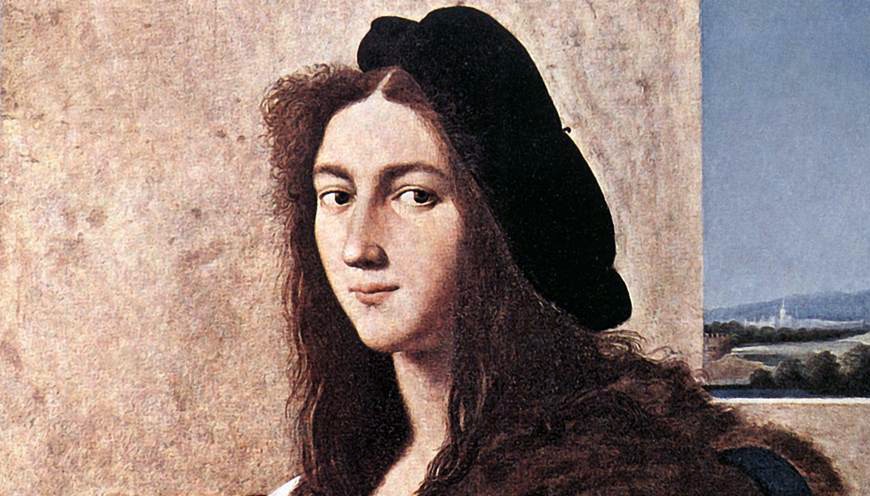 Raffaello Sanzio, also known as Raphael, is the artist behind one of the most famous paintings of our time. Portrait of a Young Man was taken by the Gestapo in World War II, and its whereabouts remain unknown to this day. The portrait is a fine example of why Raphael became known as the ‘prince of painters,’ showing his mastery of the high renaissance style. Singulart explores Raphael’s history, examining the theft of Portrait of a Young Man and discussing the composition of the portrait and how it exemplified Raphael’s quietly confident style.

Raphael accomplished an extraordinary amount in the 37 years before his death. He was born Raffaello Sanzio da Urbino April 6, 1843 in Urbino, where his father worked as a painter for the Duke of Urbino. Raphael’s mother passed away when he was nine years old, and his father remarried the following year, marrying Bernardina, the daughter of a goldsmith.

Raphael showed a prodigious talent for painting, trained by his father from an early age. It is believed he started as an apprentice in Pietro Perugino’s studio as early as eight years old, and he was working there when his father died in 1494. Although his uncle became his official guardian, he continued to live with his stepmother, inheriting his father’s art studio.

In 1500, Raphael received his first commission to paint an altarpiece portraying St. Nicholas of Tolentino. It was a joint commission with artist Evangelista da Pian di Meleto, though Raphael was regarded as the master. Raphael continued to receive impressive commissions, including the altarpiece for the Oddi family chapel in the Church of San Francesco al Prato, for which he created Coronation of the Virgin. During this period he completed another of his most important pieces, The Marriage of the Virgin, which depicts the marriage between Mary and Joseph. This piece was considered a turning point for Raphael, as he was beginning to incorporate elements of his own style alongside the techniques he had learned under the tutelage of Perugino.

Raphael lived in Florence for four years from about 1504. It was in this cultural hub that Raphael gained inspiration from other artists, most notably Leonardo da Vinci. He was particularly influenced by da Vinci’s use of chiaroscuro, using light and shade to create dramatic dimensions in a piece, and sfumato, blurring outlines and forms using a soft shading technique. While in Florence, Raphael painted a number of artworks inspired by the Madonna, experimenting with a more grandiose style.

Pope Julius II invited Raphael to Rome, where he would remain for the next twelve years. During this time he redecorated the Pope’s apartments at the Vatican, his most important commission to date. It was during this period he gained the title of ‘prince of painters’ thanks to the work he completed for the Pope and for his successor Pope Leo X.

Although Raphael became engaged to Maria Bibbena, niece of Cardinal Bernardo Dovizi Bibenna, he was infatuated with Margherita Luzi. He immortalized Luzi in the portrait La Fornarina. It is believed that the two were secretly married while Raphael was decorating the Villa Farnesina for Agostino Chini.

Under the direction of Pope Leo X, Raphael was appointed commissioner of antiquities, charged with restoring antiquities. He was also commissioned to complete ten tapestries for the Sistine Chapel, and before his death he completed seven sketches to be woven into tapestries. He lived in the Palazzo Caprini and was lauded with titles such as Groom of the Chamber and Knight of the Papal Order of the Golden Spur.

He died on April 6, 1520 after battling an illness. After his diagnosis of what even today still remains unclear, he was able to put his affairs in order and receive his last rites. His tombstone was inscribed with the words “Here lies that famous Raphael by whom Nature feared to be conquered while he lived, and when he was dying, feared herself to die.”

Composition of Portrait of a Young Man

Portrait of a Young Man portrays an upper class male subject, painted with the mannerist expressions of erect poise, lavish textures, and the softened form inspired by da Vinci. The colors of his sumptuous fur coat are echoed in the patterned rug that lies behind him, colored in shades of green and brown. Many scholars have described the subject as “confidently poised” in his appearance. He represented the higher classes that were spreading through Italy in the early 1500s.

Through the window to the right of the piece, the viewer can see green trees and bushes, and beyond that, the silhouette of the town and the church. The white buildings are offset by the hazy blue sky, although it should be noted that no colored photographs of the piece exist; any photographs of Portrait of a Young Man have been digitally colorized.

Raphael depicts a neoclassical dichotomy between humanity and nature through the flesh colored wall, the fur draped luxuriously over the shoulder of the subject, and his dark, wavy hair. It is also suggested that Raphael portrayed the interchangeability between genders through the sleeve ribbon and hand placement of the subject, as these were typically feminine elements in portraiture at the time. Placing the subject’s left hand near the heart suggests self-identity and a strong stance, perhaps leading to the “confidently poised” association.

In 1798, Portrait of a Young Man was purchased by Prince Adam Jerzy Czartoryski, son of Princess Isabella Czartoyska. He brought the painting back to Poland, along with da Vinci’s Lady with an Ermine and various Roman antiquities. The portrait was displayed in the princess’s private museum, which sought to preserve pieces of art that represented important events in Poland’s history.

In 1939, after hearing of the impending Nazi invasion, family patriarch Prince Augustyn Jozef Czartoryski rescued various artworks from the museum and hid them at a residence in Sieniawa. Unfortunately, his efforts were in vain, as the pieces were discovered and seized by the Gestapo. The pieces- Portrait of a Young Man, Lady with an Ermine and a Rembrandt piece- decorated the home of Hans Frank, who Hitler had appointed as governor of the General Government.

The artworks were then sent on to Berlin and Dresden before eventually arriving in Linz, where they were to become part of Hitler’s private collection. However, Frank brought the pieces back to his home in Krakow in 1945, for his own personal use at the Wawel Castle. This is the last place that Portrait of a Young Man was seen. Along with 843 other artefacts, Portrait of a Young Man was missing from Wawel Castle when Frank was arrested by American troops for the war crimes he had committed. Lynn H. Nicholas, historian and author of The Rape of Europa, stated that if the painting were to be recovered today, it’s worth would be over 100 million US dollars.