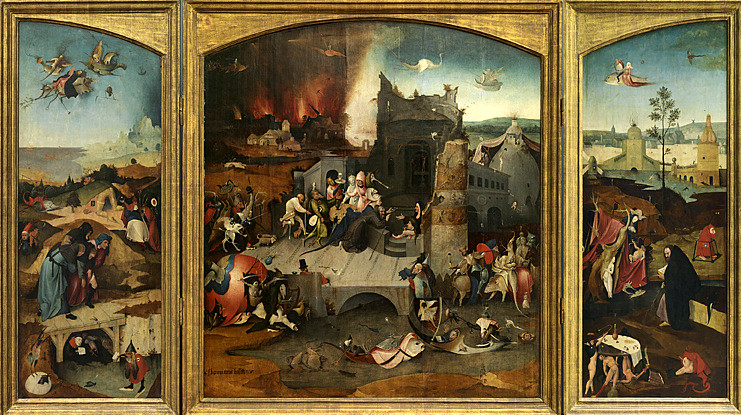 Hieronymous Bosch’s triptych The Temptation of Saint Anthony exemplifies his unique painting style that was characterized by rich symbolism and apocalyptic imagery depicting hell and unimaginable horrors. His grotesque, pessimistic, fantastic style has had a far reaching influence over the course of art history. In this article, Singulart takes a closer look at Bosch, his unique style and the symbolism of The Temptation of Saint Anthony.

Who was Hieronymous Bosch

Hieronymous Bosch (c. 1450 – 1516) was a Dutch painter from Brabant and is one of the most renowned figures of Early Netherlandish painting. Not much is known about his life and education, so his work is often divided by art historians into three periods: early, middle and late. Most of his works were painted in oil on wood, with him being most remembered for his triptychs depicting religious and allegorical scenes in his characteristically apocalyptic style. It was Bosch’s unique style which had a great influence on Pieter Bruegel the Elder, the Dutch 16th century painter, and also on the Surrealists in the 20th century. Bosch was considered the first modern artist by the Surrealists due to his daring departure from reality and his use of imagination to depict realms and imagery unknown to humankind. He is most famous for his detailed images of hell, which personify man’s greatest fears, and the turmoil of inner, emotional human life. These images are filled with absurd, grotesque imagery and metaphors.

What’s happening in The Temptation of Saint Anthony?

The Temptation of Saint Anthony is made up of three wooden panels, constituting a triptych, with two outer panels also painted. The left panel depicts the flight and fall of Saint Anthony. In the sky, the saint is attacked by a group of demons. Below, carved into a hill shaped like a man on all fours is the saint’s grotto, towards which another group of demons, dressed as clergymen and a deer, march. In the foreground, Saint Anthony, who seems exhausted and unable to walk, is helped across the bridge by a monk and a layman (who is thought to also be a portrait of Bosch). The bridge crosses a lake and underneath are huddled three figures reading a letter. On the lake, a bird-like demon skates and on the banks stands another bird-demon on top of a hatching egg.

The central panel depicts the scene of the temptation of Saint Anthony and is rife with apocalyptic, hellish imagery. In the center of the composition, on the steps of a crumbling tower kneels Saint Anthony whose hand indicates to his small room, where a miniature crucifix hangs. In the background, a city is on fire (this was a traditional symbol of Saint Anthony’s power to protect against fire). The rest of the composition is taken up by groups of demons, in all shapes and sizes, exemplifying Bosch’s grotesque and imaginative style. The entire scene is fantastical and terrible, making it easier to understand the debate regarding his intentions. However, whether he was motivated by heretical or orthodox religious views remains unclear.

The right panel depicts the Contemplation of Saint Anthony. Here, Bosch depicts Saint Anthony contemplating the naked body of a woman, who emerges from a tree trunk held open for her by a toad (the nude female body was a symbol of luxury at the time). The rest of the composition is filled with other diverse symbols personified by various demons, from the two figures flying on a fish to the group of demons in the foreground.

On the other side of the panels are paintings depicting the Arrest of Christ and Christ Carrying the Cross painted in grisaille. The contrast between the interior scenes’ chaos and color alongside the exterior scenes subdued nature was common of the tradition for altarpieces, which would be closed during Lent. Therefore, it is the interior of The Temptation of Saint Anthony that reveals Bosch’s real talent and unique style.

The Birth of the World (1925): The Story of Joan Miró's Masterpiece

Around the World with Niki de Saint Phalle 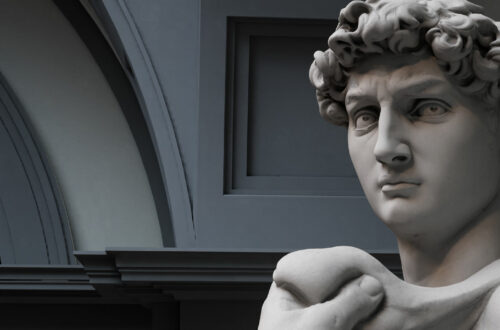