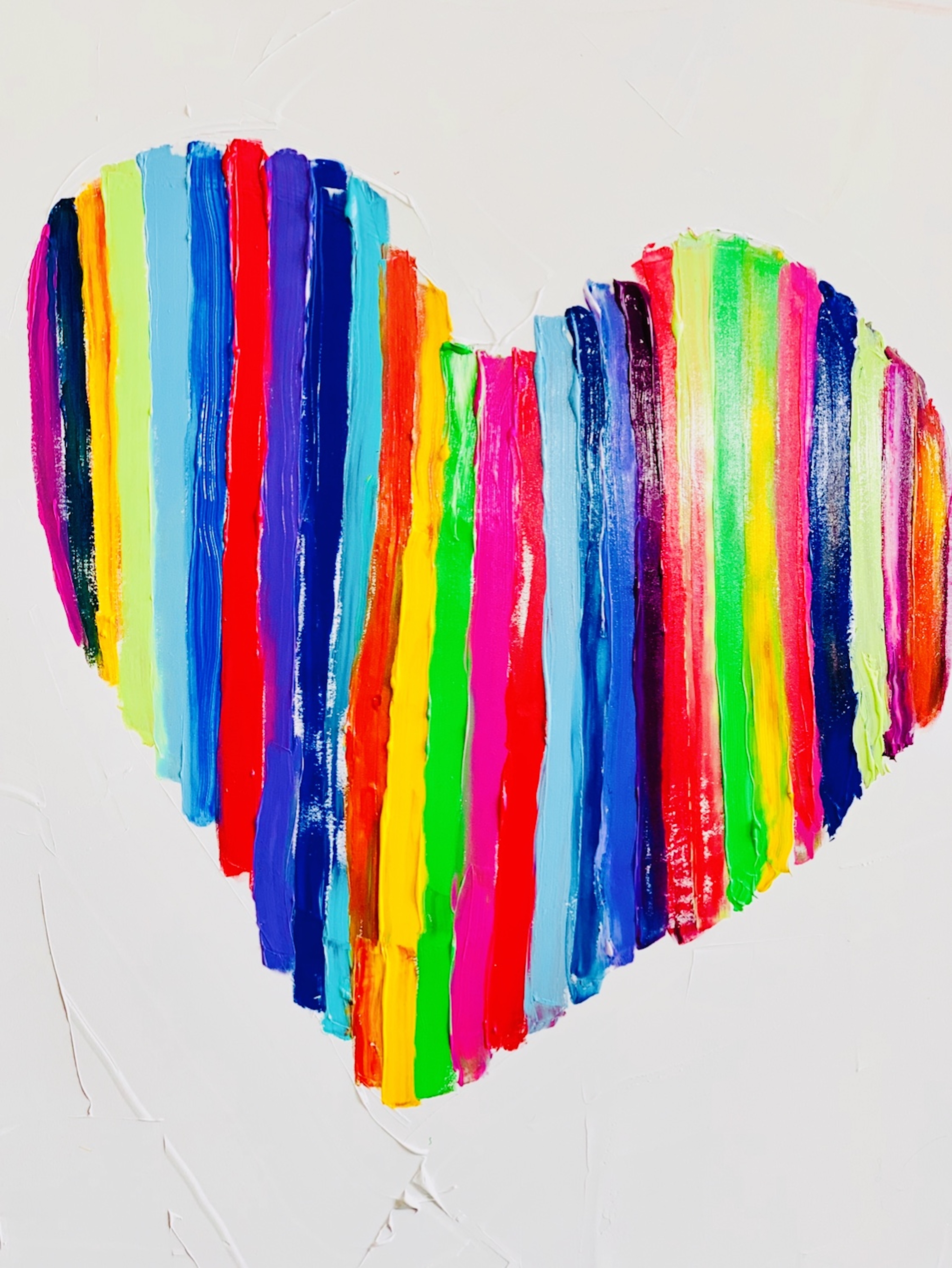 Singulart has many values, but diversity and acceptance are at our core. In this article, we want to empower the voices of our LGBTQ+ artists and highlight all the colors of the rainbow. Let’s celebrate Pride!

Thankfully, in many societies, artists can express themselves freely. However, that is not a liberty that all of our artists enjoy. We would like to share a message from a Singulart artist struggling to find acceptance in his homeland.

Pride has a lot of meaning for me. It’s a personal reminder to be entirely unapologetic for who I am and celebrate my queerness. In more general terms, Pride is still a protest for equality. It’s a march to remember how far we’ve come and how far we still have to go before everyone feels safe and heard in our society.

My perspective has always been filtered through a queer lens. So it’s only natural that my work reflects this. I believe it’s why I’ve enjoyed early success. I’ve been creating work to represent and document queer culture in a vacuum. Society requires diversity on the walls of galleries and museums. I create in the hopes that everyone is represented when they walk into those spaces.

I’d like people to approach acquiring an artwork without the mindset of ‘potential appreciating assets’ at the forefront. I believe people should buy work because it has evoked a reaction in them in some way, whether it be a conceptual thought or mood, etc. This way the artist knows their work is going to someone who appreciates it and the owner is supporting the career of an artist they genuinely believe in. I see this as the ultimate win-win situation.

“Be yourself, everyone else is already taken.”

My first Pride celebration came later in my life. It happened when I moved to the Netherlands, four years ago. Where I come from, Serbia, it was very dangerous to participate or be part of Pride because of strong and violent anti-gay riots that have occurred in the past decade. The gay community is still struggling there.

Living in Amsterdam made me realize that Pride is more important than I thought. It addresses many issues in society. It is not only being open about yourself and standing up for your legal rights as a human being. It is so much more. It mirrors society where someone lives. It is still mind-blowing to me that in the 21st century, in some countries being homosexual is punishable by death, or it is illegal or considered an illness.

Pride also reminds us of all those who have lost their lives in the past, especially during WW2 when the Nazis started labeling homosexuals in concentration camps. Today the triangle symbol is part of Pride. Considering that brutal history, it is necessary to heal through celebration.

I have also challenged myself and written my first book, a collection of nine erotic stories. It was successfully published and promoted. I wrote (produced and acted in) a short film based on one of the stories in the book. The short was screened at four different international queer film festivals in Europe. I am glad that I had the courage to create it because once I did it, it felt like I had dealt with the topic sufficiently and that I could then explore other topics that I was interested in. That way, I do not have hidden desires or unfulfilled subjects that occupy my mind. As an artist, it is good for me to delve into a subject until I exhausted it and then I am able to see what I can take inspiration from afterward.

Pride to me is a proudness and freedom to be exactly who I am in all walks of life. We’ve come so far as a society and I’m fortunate to live in Los Angeles, California, a melting pot of people from all over the world that seems to ‘get it’. We all manage to get along and respect one another.

Being part of the LGBTQ+ community has helped me immensely as an artist. We are some of the most creative people on this planet. I’ve had lunches and conversations with truly impressive, imaginative minds within the community and feel privileged to count them as friends.

There still exists a bit of prejudice within the art word that I think will go away over time. Original art is not just for the rich anymore. Collectors are coming around to the idea of purchasing art online, especially now with the restrictions of Covid-19 lurking in the shadows. Websites like Singulart.com are innovative and making buying art online an easy and enjoyable experience.

It’s the person, not the parts. Being gay is a gift, a variation on a theme. Love is too powerful to be shaped or confined.

PRIDE to me means accepting who you are and being proud of all you stand for.

The parades all over the world help to increase the visibility of LGBTQ+ people. PRIDE, as opposed to shame and social stigma. Nobody should be able to make you feel ashamed of who you are or what you stand for. PRIDE nowadays is becoming more and more important again if you have a look at the negative changes in society worldwide regarding the acceptance, security, and discrimination of LGBTQ+ people during the last years.

With my paintings, I want to arouse a new need for sensuality, sensitivity, and the appreciation of beauty, also the male beauty. I feel that in ‘modern times’ that the male body was mostly omitted in fine arts, in contrast to paintings and sculptures of the ‘old masters’. I think it is time that male beauty is included again in modern genres.

I would like to see a change in how people ‘look’ at art. Many people see art as an investment, a different kind of ‘shares’ or ‘stocks’. That makes it difficult for young, emerging artists, as many galleries don’t have any interest in them, as they ‘cannot generate enough income’, so they are not ‘interesting’. I would love to see a return to appreciate art for what it is, art.

To me Pride means having the freedom of self-identification, recognition, and respect of other people’s opinions about love. I think the Pride movement is very important, especially in countries where prohibitive laws may still be in place.

My artworks reflect many different topics as well as themes related to gender and identity. In some of my works I deliberately leave the gender of the subject open to interpretation, you can’t say if the face belongs to a man or a woman. Everyone is free to have their own personal opinion about how it appears to them.

“I used to think I was the strangest person in the world but then I thought there are so many people in the world, there must be someone just like me who feels bizarre and flawed in the same ways I do. I would imagine her, and imagine that she must be out there thinking of me too. Well, I hope that if you are out there and read this and know that, yes, it’s true I’m here, and I’m just as strange as you.”

What does pride mean to you?

Pride is about accepting what you are and what you have achieved and, importantly, accepting the achievements of others without feeling competitive. There’s no better or worse – just different. And that’s the same for religion, race, gender, and sexuality.

Art and activism are often associated. Banksy, Keith Haring, Ei Wei Wei, and Cindy Sherman come to mind. Grayson Perry is known for his ceramics and tapestries but also for dissecting society’s gender stereotypes and prejudices.

As a gay artist, I purposefully try to be inclusive. I find people who hold very different positions on certain issues can experience the same sense of enjoyment in a single piece of art. I created a series of art inspired by the LGBQT+ flag. But it’s also seen as a symbol of peace or a celebration of healthcare workers, depending on your perspective. And that’s okay with me. As long as people view the work with love.

The pressures of the commercial property market have increasingly forced artists out of big cities. Unable to pay the rents in the areas where people are shopping or going to restaurants, the workplaces of artists have become removed from the people they make the work for.

It would be wonderful if empty spaces in the middle of cities could be used, even for a short time, as creative spaces where artists could create their work with an audience to watch or participate in the process.

“Covid has taught us that a health worker’s contribution is as valuable as that of an investment banker. Now’s the time to see the value in art.”

What does pride mean to you?

The fight to raise more awareness of LGBTQ+ issues, acceptance, and overall human rights. I am privileged enough to live in London. However, we’ve still got plenty more to do to eradicate discrimination and improve overall acceptance. Therefore pride is only a small part of what still needs to be done. Many countries are heading in completely the opposite direction with the aim to eliminate, exclude, or just simply mute the LGBTQ+ community. Let’s remember that Pride started as a riot. I am grateful for the people who started the fight and it’s up to us to continue.

I express my experiences through my art, places I have visited, the people I have met. Some of my pieces are based on how I felt at a particular time of my life, which I expressed through my art piece “BEING” another art piece called “MONGOLIA “ which ultimately represents a landscape that is often mistaken as something KINKY because of its shapes and structure. Therefore, I would definitely say being part of the LGBTQ+ community influences my art to a certain extent sometimes in a conscious/ subconscious way.

There are so many talented people out there who might never have the opportunity to shine because they don’t have the resources to express themselves and create. Out of my own experience, it’s difficult to set foot in the art world without studying art and/or having a wealthy network. Even art competitions seem to put more value into a written essay of someone who studied art rather than the actual art, which cuts down opportunities even further. I would like to see more support for those who are talented and might not have the contacts, without being judged on educational grounds.

Singulart curated a collection with artworks empowering and celebrating pride and love as well as highlighting LGBTQ+ artists. You can discover the collection here!

How do I price my artwork? 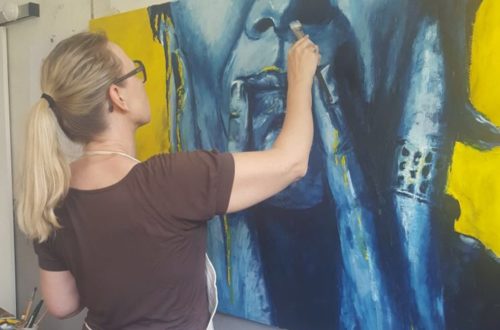 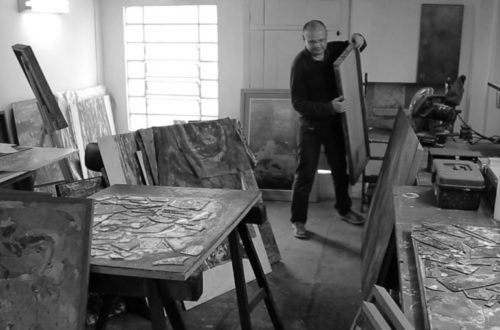 The painter Claudio Boczon about his work and his artistic vision 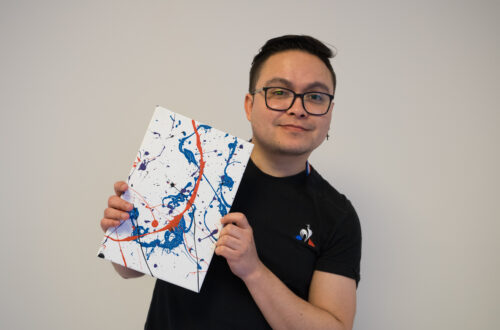