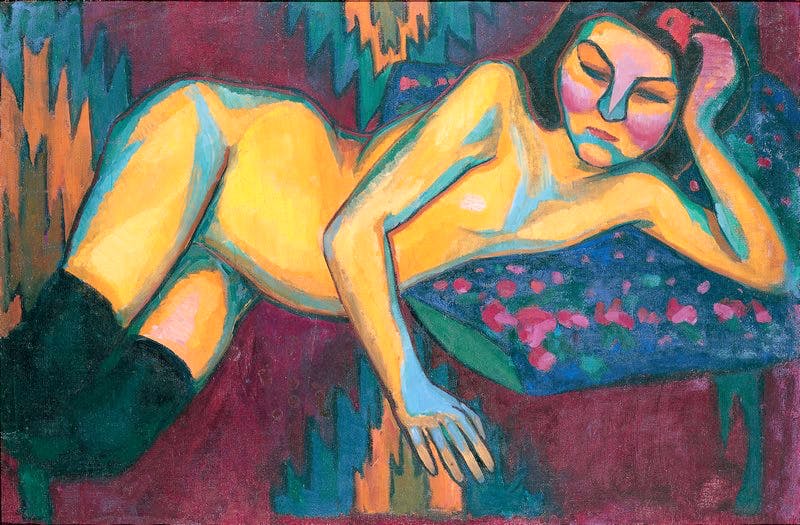 Sonia Delaunay is one of the artists featured in Singulart’s exclusive partner sale with the Perve Galeria. Discover the life of an icon here.

Sonia Delaunay’s innovative explorations of color and shapes began in 1911 when she made a quilt for her son Charles. That quilt was later considered a breakthrough in the history of abstraction.

In the postwar period of the late 1960s, Delaunay developed a more abstract and poetic style. Through painting, mosaic, and tapestry, the artist expressed her creativity in everything from classical to monumental formats.

Her husband Robert Delaunay used a simple and universal style in his abstract works, meanwhile Sonia preferred using color and various formats to explore abstraction. The Roaring Twenties was marked by the blossoming the abstract movement and was the famous couple’s most creative period.

Sonia Delaunay was born on November 14th, 1885 in Grandizhsk, Ukraine. She had little formal training in fine art, only having two years of attendance at the Academy of Fine Arts in Karlsruhe, Germany. At 20 years old, she left to join the Académie de la Palette in Paris. There, she discovered Fauvism and Post-Impressionism for the first time, which inspired her to develop her vision of nonobjective art. During this Fauvist period and inspired by Van Gogh and Paul Gaugin, Delaunay explored the interaction of color in her artworks. Depicting her summer vacations as a child in Les Finlandaises or her Yellow Nude artwork perfectly illustrate her technique. The artist’s portraits often detach themselves from a colorful background, reminiscent of Matisse’s oeuvre.

The Delaunay couple’s style changed radically at the beginning of the 1910s. Together, they created and developed the Simultaneous technique, playing with color contrasts and dynamics, mixing cubism and futurism together. This technique would later be coined as Orphism by the famous poet and critic Guillaume Apollinaire, though Sonia preferred the term “Simultaneous contrast”. The movement was innovative and did not reflect any trend at that time. Increasingly drawn to abstract art, Delaunay created the Salon des réalités nouvelles (New realities salon) in 1946, to promote abstract art.

A creative freedom: from paintings to an infinite diversity of formats and colors

Along with paintings, Delaunay explored textiles as a way to develop her approach to color, which she called “color exercises”. She created the textiles under the label Maison Delaunay and expanded her interest in couture by creating the costumes of Sergei Diaghilev’s Russian Ballets . One of Delaunay’s sketches is available during Singulart’s partner sale with the Perve Galleria. The artwork embodies perfectly Delaunay’s color exploration in textiles.

Her textile work became somewhat controversial when Michel Seuphor, a critic and abstract painter, thought that her artistic career was too restricted by the public to the field of fashion, when she was an artist in many different fields, “I personally regret that for many years Sonia Delaunay, instead of devoting herself entirely to painting, has dispersed her talent by trying to introduce the simultaneous ideas of her painting into fashion.”

It was Anne Montfort, curator of the Sonia Delaunay retrospective at the Museum of Modern Art in Paris, who argued that Seuphor was wrong to say that Delaunay’s work must have been in one field more than the other. Her oeuvre is characterized by all the fields she touched upon.

In a more recent review, it is highlighted that the patterns invented on fabrics and textiles by Delauney are a real inspiration in contemporary paintings “It is not without importance for the historian that her works predate those of Mondrian, one of the pioneers of abstraction.” – Jacques Damase and that her fabrics are still a source of inspiration for all generations of young painters.

Constantly attracted by variety and reinvention, she ventured into monumental productions like her fresco at Railway Palace for the 1937 International Exhibition. She was often exhibited with her husband at the Centre Georges-Pompidou, to which she made several donations.

A symbol of feminity?

In 1964, the Ukrainian artist became the first woman alive to get a retrospective at the Louvre Museum, which was a beakon of hope for Women in arts at that time.

However, shortly before her death in 1978, Sonia Delaunay was interviewed and asked whether she considered herself a feminist. She answered, “No, I despise that word. I have never consciously considered myself as a woman. I am simply an artist”.

She passed away on the 5th of December, 1979 in Paris, leaving behind an abundant body of work including printed fabrics, artists’ books, haute couture dresses such as the famous dress of the British writer Nancy Cunardun. Delaunay’s vast legacy still influences the art world today.

Discover Delaunay’s work and many more grand masters in the exclusive partner sale with the Perve Galeria. 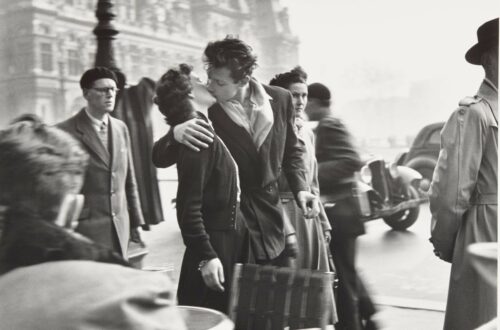 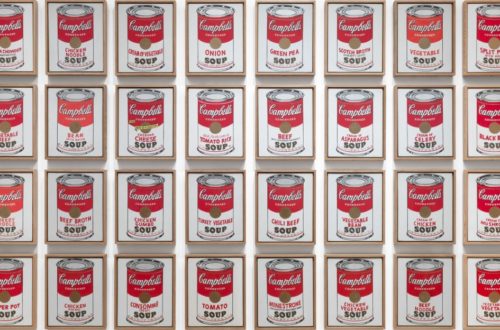 Consumption, Creativity, and Cans of Soup: How Andy Warhol Created an Icon