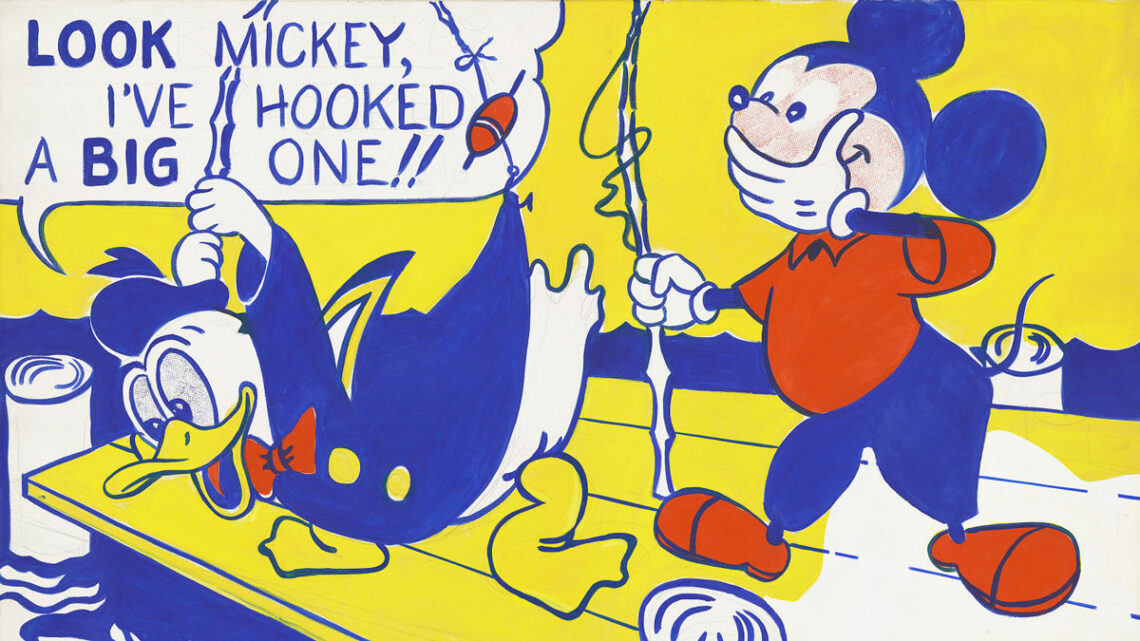 Look Mickey signifies a turning point in Roy Lichtenstein’s career as a pop artist. It closed the gap between his abstract expressionism work and the beginning of his work in pop art, and was praised by critics for its humor and irreverence. It is the first piece in which Lichtenstein used many of his trademark elements, such as Ben Day dots, speech bubbles and the use of comics as source material. Singulart examines the creation of the pop art movement, the use of Ben Day dots that has become synonymous with Lichtenstein’s style, and the composition and importance of Look Mickey.

Lichtenstein is one of the biggest names of the pop art movement, along with Andy Warhol, Eduardo Paolozzi and James Rosenquist. But how did the movement begin? In 1952, a group of ten artists including Paolozzi and Richard Hamilton met regularly to discuss pop culture’s place in art. The group called themselves the Independent Group, and while they were suspicious of the commercialization of pop culture in art, they were inspired by the imagery of Western movies, science fiction, comic books and billboards.

It’s believed the name “pop art” could have been coined by Hamilton in a letter he wrote to Paolozzi, and that Paolozzi was the first to incorporate the word “Pop” into an artwork. His 1947 collage I Was a Rich Man’s Plaything features the word ‘POP!’ bursting out of a pistol, amongst images of pin-up girls, the Coca-Cola logo, and a WWII bomber.

In America, artists were rebelling against the rigid rules of modernism. Jasper Johns was creating pieces that challenged the way viewers saw conventional images such as flags, letters and numbers, while the neo-dada movement was gaining traction thanks to “Happenings” organized by Allan Kaprow and impact of the Fluxus movement. It was in the wake of the neo-dada movement that artists such as Warhol and Lichtenstein emerged.

Although the term pop art had been coined in the United Kingdom in the 1950s, it was officially recognized as a movement with the Museum of Modern Art’s 1962 Symposium on Pop Art. The pop art pieces produced by American artists were generally more bold and aggressive compared to their UK counterparts; the artists from the UK were removed from the American pop culture imagery, and as such, their work had nostalgic, sentimental overtones. In contrast, the American artists, who were constantly bombarded with advertising, used this imagery in their art with a dramatic, ironic sense.

Artists such as Warhol continued to hold a presence in the art scene until well into the 1980s, and pop art is still a popular movement today. Neo-pop artists include Jeff Koons and Takashi Murakami.

One of the defining features of Lichtenstein’s work is his use of Ben Day dots. Named after illustrator and printer Benjamin Henry Day Jr., the printing technique employs small colored dots grouped together as a way to inexpensively create a dominant color – for example, magenta dots are widely spaced in order to create the color pink. Ben Day dots were purchased as sheets of transfers and applied to drawings, and artists would use dot-grid screens to create depth and differing tones in their images.

Lichtenstein used this technique to give his work the appearance of mechanically printed comic book pages. Look Mickey was the first artwork by Lichtenstein to utilise the Ben Day dots, signifying a departure from his abstract expressionism period.

The story behind Look Mickey

If it wasn’t for Lichtenstein’s son, the world may never have discovered the artist’s comic-book style. According to art critic Alice Goldfarb Marquis, Lichtenstein’s son pointed to an image in a comic book and said, “I bet you can’t paint as good as that.” Lichtenstein rose to the challenge, apparently tired of trying to explain his abstract concepts to his son and his classmates.

There are a few theories about the inspiration for Look Mickey. The Lichtenstein Foundation states that the artwork was based on an image from the Little Golden Book series, while the National Gallery of Art elaborates that it was inspired by the children’s book Donald Duck Lost and Found, which features an illustration of Donald Duck and Mickey Mouse fishing off a pier. Another theory is that it was an enlargement of an image that appears on a bubblegum wrapper.

Lichtenstein reduced the colors of the original image to the three primary colors of red, yellow and blue, simplifying the composition of the piece and elevating its mass appeal. He has eliminated all figures from the piece with the exception of Mickey and Donald, and rotated the dock so that Donald is not looking off the end, but rather the side. A speech bubble above Donald Duck’s head reads “Look Mickey, I’ve hooked a big one!” while his fishing hook is firmly affixed to his own tailfeather. This was the first time Lichtenstein had employed the use of a speech bubble in his work, a feature that would become a signature of his over the course of his career.

Reflecting on the painting, Lichtenstein said:

“The idea of doing [a cartoon painting] without apparent alteration just occurred to me… and I did one really almost half seriously to get an idea of what it might look like. And as I was painting this painting I kind of got interested in organizing it as a painting and brought it to some kind of conclusion as an aesthetic statement, which I hadn’t really intended to do to begin with. And then I really went back to my other kind of painting, which was pretty abstract. Or tried to. But I had this cartoon painting in my studio, and it was a little too formidable. I couldn’t take my eyes off it, and it sort of prevented me from painting in any other way, and then I decided this stuff was really serious… I would say I had it on my easel for a week. I would just want to see what it looked like. I tried to make it a work of art. I wasn’t trying to copy. I realized that this was just so much more compelling.”

Want to discover artworks in a similar style? Check out Singulart’s Inspired by Roy Lichtenstein Collection.

Woman in a Purple Coat (1937): One of Henri Matisse's Final Oil Paintings 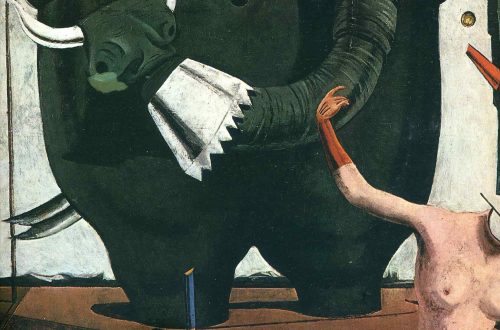